Brightly Beams Our Father's Mercy is a timeless Christian hymn, here arranged for men's voices. The text for Brightly Beams... is a glorious message for all and especially for those who yearn for the welfare of those who have strayed. Both the vocal parts and piano accompaniment are very accessible. Works well in small groups or larger choirs. 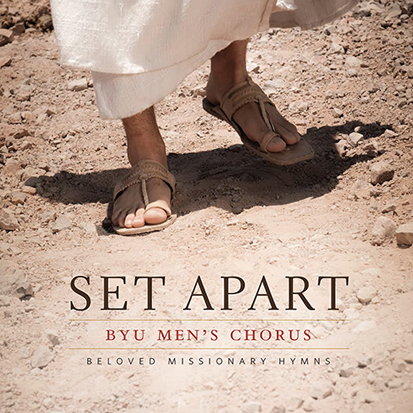 This arrangement is included on the album Set Apart: Beloved Missionary Hymns, which was released by the BYU Men's Chorus on April 5, 2013.

Two other hymns included in the Set Apart album were also arranged by Lane Johnson: Sweet is the Peace the Gospel Brings, and Onward, Christian Soldiers. Click the links for more information about these hymn arrangements.

Brightly beams our Father's mercy
From his lighthouse evermore,
But to us he gives the keeping
Of the lights along the shore.

[Chorus]
Let the lower lights be burning;
Send a gleam across the wave.
Some poor fainting, struggling seaman
You may rescue, you may save.

Dark the night of sin has settled;
Loud the angry billows roar.
Eager eyes are watching, longing,
For the lights along the shore.

Trim your feeble lamp, my brother;
Some poor sailor, tempest-tossed,
Trying now to make the harbor,
In the darkness may be lost.

She Sat and Sang (TTBB)

It is Well with My Soul (TTBB)

Nearer, My God, to Thee (TTBB)

Did You Think To Pray? (SATB)

Mine Arm is Lengthened Out

Did You Think to Pray? (TTBB)

A Breath of Kindness

Get the latest updates on new products and upcoming sales